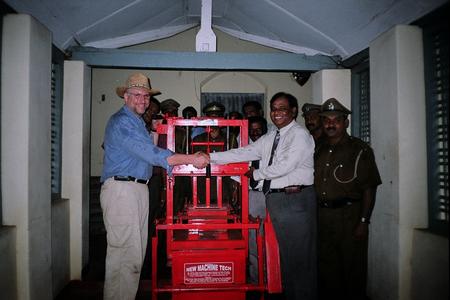 In June 2005 we made the first of many visits to the local prison.  This is a place that houses both men and women: convicted felons, those held pending trial, and political prisoners. It was everything one would expect in a third world prison.
The warden was a kindly man who truly seemed to have the prisoners' welfare at heart.  His hands were tied by policy and an almost non-existent budget.

He asked if we would bring small, personal sanitary items to the prisoners.  We learned that the prison does not provide such things as soap, toothbrushes, or toothpaste to the inmates.  Those without family near may go years without brushing their teeth.  Grateful for the chance to serve, we immediately bought the following items for the 225 inmates, of whom 25 where women (some with children):

We wanted to distribute the supplies ourselves, to be sure the goods are actually given to the prisoners and more importantly,  so we had the chance to see the prisoners happy for a moment.  Much to our surprise, the warden agreed to let us personally distribute  our gifts and called out the entire population.

We began by handing out the supplies in silence.  We soon realized the inmates have probably not had a kind work uttered to them in a very long time.  We then started the habit we keep to this day:  we shake each person’s hand;  offer them a smile; ask some where they are from, others what their name is.  (Our limited Tamil ensures that the conversation will be short!)

After this lengthy process, we gave a box of cookies to each of the guards.  They were as happy as school children to receive this small token.

We knew then and each time we returned, that we cannot change the hard lot these prisoners must face.  Those imprisoned for political reasons have no hope of release in the near future.  Yet for a moment, we smiled at them and they returned the smile.  They felt the hand of someone who was not their master but their friend.  And, for a moment, just a moment, we hope they felt the Savior’s love.

The warden, sensing that our intentions were pure, asked a another favor.  The prison is at the highest point in the town and their  well, at  a depth of 20 feet, was not deep enough to supply water during the long summer months.  The well went dry during that time and both prisoners and guards were left without.  The warden asked if we could provide a deeper well and a year-round supply of water.  We were grateful for the opportunity and said, "Yes."

In the coming months, we found the promise was going to be very hard to keep.  Upon initial investigation we were told that the well needed to be 50 feet deep.  The projected cost about $500 was within the abilities of our small foundation to pay.  At 50 feet no water was found.  In fact, we drilled to 150 feet before hitting a stable water source.  The cost went up five-fold and we agonized as we had so many commitments and so little money.

In mid-2007 the warden died and we thought hope of continuing our  important work at the prison died with him.  In early 2008, we returned  and were pleased to find the temporary warden even more grateful for our past efforts.  Once again the doors were flung open.  We brought our usual supplies and during our visit,  this warden had a new idea, one that filled us with joy on its completion. 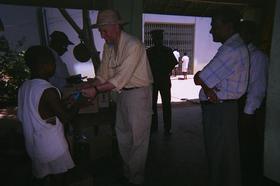 He asked if we would buy a cinder block making machine.  (Brick and block are the principle material for wall construction in Sri Lanka).  His plan was to employ the inmates in making the blocks and sell them from the prison yard.  Proceeds of the sale would go into a fund to care for the children of the prisoners.  We were presented with another opportunity to make a long-lasting improvement to the lot of these poor souls!  When we learned the machine cost only $500 we jumped.  After several days of visiting suppliers and small block factories, we found a good quality machine, with a 2-year warranty,  that could be delivered quickly.  We had an exciting time presenting the machine, taking the standard pictures of the warden and Jack shaking hands, etc.  We were left stunned by the projection numbers he told us that day.  He planned to make 350 blocks a day, 7 days a week.  Net proceeds for one year would be $10,000!  We never conceived that in one year there would be a twenty fold increase on our investment.  In addition to the money, the prisoners would have a chance to leave their cells and engage in productive activity.  With not even an exercise yard, these men are literally wasting away.  Perhaps this opportunity to earn money for their children will inspire the spark of life they need to endure until the end of their sentences.